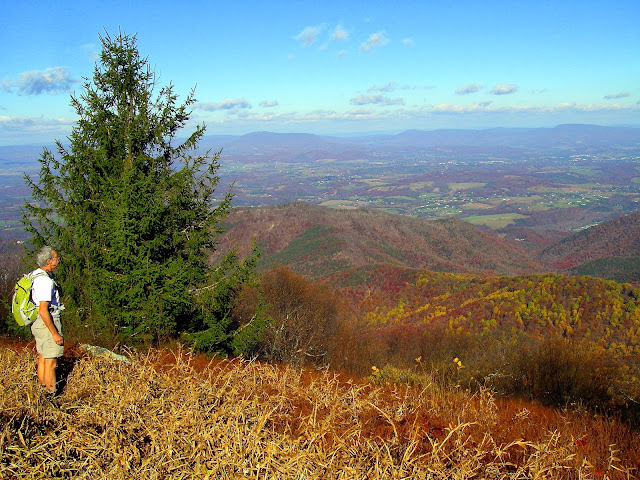 Sometimes you realize that you shouldn't have waited so long to do a hike again. Such was my case with Bluff Mountain. I had hiked the Appalachian Trail up this mountain once before, way back in 1994. I don't really remember what I thought of it then. Maybe it was hazy, or maybe I just didn't feel like writing, because my journal from that day only makes mention that I was there. But I still knew it had a view and so it seemed like it was time to rediscover it. I've been very close to it again quite a few times during the intervening years, on a number of hikes to Rocky Row, and also to several other nearby peaks like Pinnacle.

It is a very conspicuous peak from a number of more distant viewpoints throughout the region. One reason for that is that despite its modest elevation of only 3,372', it is the most prominent peak along a 26 mile stretch of the Blue Ridge and dead center between the even more prominent, but less distinctive peaks of Apple Orchard Mountain and Rocky Mountain. It is one of only 106 mountains in Virginia to have over 1,000 feet of prominence and rises to a fairly small summit. These qualities make it stand to reason that it was once a firetower peak, and should command an extensive view. It was time to refresh my memory...

My approach the first time had been on the Appalachian Trail, but several explorations of other peaks in this area had brought a potentially interesting, and more challenging option to my attention. Assuming the Forest Service map was correct and there was public access at the start, the topo showed a pipeline and attendant service road going up Bennetts Run, then making a near beeline most of the way for the summit from the northwest. Satellite imagery seemed to confirm the same and so a plan was made. My frequent hiking companion +David was free, and up for a good hike, so off we went to explore.


We found the gated Forest Service road and began our hike at an elevation of only 900', leaving a respectable climb to the top. The route was a bit confusing at the beginning as we skirted around a large car junkyard on private property, then tried to follow a more obscure woods road to the pipeline. We lost it in brush and briars and had to just cut through the woods to find the pipeline, only to discover it too was pretty brushy, with waist high greenery still not quite knocked down by the return of cold weather. This would not be fun in the green months but nevertheless led us up Bennetts Run, and between the peaks of Pinnacle and Target Hill (both worthy destinations themselves) to the point where the small stream split into its North and South Forks. The hiking became much more interesting at this point, as the pipeline abandoned the overgrown drainage and climbed steeply straight up the fall line of the Northwest Ridge of Bluff Mountain. The route became a rocky treadway, a narrow road really, and climbed up through open woods with some occasional views behind us of Pinnacle and Target Hill, and through the “V” they create, which allowed us to see part of the fog-laden Maury River Valley and the ridges of the Alleghenies beyond. The grade eased briefly in a couple areas, but overall it remained a fine, steep ridge that was relatively narrow and scenic. I liked it a lot!


Finally, at about the 2,500’ level, the pipeline veers abruptly south to drop down a few hundred feet in elevation, then climb again to the shallow gap separating Bluff Mountain and Hellgate Ridge. The ridge we were on looked more appealing than ever now, and we certainly didn’t see any reason to lose elevation, so we opted to head off-trail and continue on our current course to the top, which was now only ¾ of a mile away, albeit still over a 800 feet higher. There was a bit of scrambling, some limited views, and a bit of rhodo-whacking to round things out, but all in all it was a fine little climb. A short distance from the top, we hit the old fire tower access road and followed it the remainder of the way.


Though the lookout tower that would have allowed a 360° panorama is sadly now long gone, the semi-open summit did not disappoint. Between the hardwoods and a curious handful of red spruce - usually found considerably higher or farther North, there was a great view to the south of High Peak and No Business Mountains, with the vast flattening of the Piedmont extending beyond to the limits of the horizon. But the real reward was the sweeping view of mountainous country to the North and Northeast. Close at hand were many of the low, but steep, rugged, and pointy peaks that form the western front of the Central Blue Ridge in Virginia. Among these were Elephant Mountain, Garnet Peak, Silver Peak, Whites Peak, and also Adams Peak and McClung Mountain - the last two personal favorites. To the left of all those peaks was a long swath of the Great Valley, with Buena Vista and Lexington both in sight. Beyond the valley rose the long wall of the Alleghenies, with House Mountain, Big Butt, Jump Mountain, and Elliot Knob all plainly in view along with many others. I have no intention of allowing twenty years to pass again before a third visit.

Rather than backtracking on the return hike, we followed the Appalachian Trail south a short distance, then headed off-trail again to traverse Hellgate Ridge. This was rather thick in places, but we did find a neat pinnacle on the ridgeline, as well as a small clifftop overlook with views of Silas Knob and Big Rocky Row. We also found a limited, but great view of conical Peak 2310 and impressive looking Sugarloaf Mountain.

We should have continued along the ridgeline to the top of Pinnacle for more great views and another summit for the day, but instead we dropped back down to Bennetts Run from the low spot on the ridge. This required some very steep and tedious sidehilling, and dealing with a lot of fallen trees near the creek before climbing back uphill again anyway to regain the pipeline trail. From there is was easy walking on now familiar terrain, and we found and successfully followed the faint road we had lost near the beginning of the hike. It will serve me well in the not too distant future when I do this hike again. I’m not going to neglect this great peak again now that I have rediscovered its treasures.


Route of the Bluff Mountain hike. To see a larger map click here.
Note: There seems to be a problem with the default map view I have selected not showing properly. Please select the map you prefer from the drop-down menu in the upper right hand corner of the map.

Pictures from this hike.