I can't believe it has been eight years since I last went out West, but that trip - to Idaho - was way back in 2008. Way too long, especially considering that several years in the past twenty I have made as many as three trips out in a single year. That's obsession! The last few years I have concentrated on trips to the Northeast, another region I dearly love and am far from being done with, but going West again was long overdue and I found myself justifiably and expectedly excited! Now, after committing to my buddy +David Socky late last year to going to Colorado this year, and hoping that nothing would come up to prevent it, the day had finally arrived!


Planning was uncharacteristically lackadaisical early on, beyond making an attempt to climb 14,259' Longs Peak the primary goal and desire of the trip. Excepting myself and Dave being in, the other details were fuzzy at best but had the number of people potentially interested running as high as eight or nine people. It was more or less a given that we would drive out though, and that the bulk of the trip would be spent in Rocky Mountain National Park, and perhaps the adjacent Indian Peaks Wilderness. Eventually the group solidified at four, with +Stephanie Petri  and Bill Walker claiming spots, while others either never committed in the first place or had to back out. I found it kind of exciting that this would be the first time that either Steph or Bill had ever been out West, and knowing how it has affected me, I couldn't wait to see their reactions to all the awesomeness I knew we were going to experience.


With only a couple of months left to go, the real planning finally kicked in and we started ironing out details, creating an itinerary complete with alternatives and some openess, and making any necessary arrangements and reservations. We ultimately settled on spending the bulk of our time in Rocky Mountain National Park, where we would do a couple of dayhikes, a three day backpacking trip, and a climb of Longs Peak. And we couldn't go all the way to Colorado without Steph and Bill having an opportunity to bag the state highpoint, so we allowed for a couple days around Leadville for that, and possibly for La Plata Peak as well.

With only a few weeks to go, it seemed that Bill would not be able to get quite enough days off work to allow for the drive, but he decided he could fly to Denver and we could pick him up after our two day drive, and drop him off again at the end of the trip, thereby allowing him to leave after work on a Friday and fly back home the following Sunday while the remaining three of us would leave on a Thursday and return home two Mondays later. This wasn't necessarily ideal for Bill, as he was actually wanting to join in the cross country drive, but at least he could still do the important stuff, and it would make the drive out for the remaining three of us much less cramped in the car.

The last few days really dragged by but the excitement levels increased, then Dave and Steph, whose journey had already started a couple hours earlier, pulled into the driveway and it was finally time to go! I loaded my slightly excessive amount of gear into the car, kissed Leanne goodbye, and we hit the road. "Suffer-fest 2014" was underway! Well, actually the itinerary seemed a bit less ambitious than my usual "vacations", but we were going to be dealing with significantly higher elevations than usual -  a fact that would compensate for the lower average daily miles and elevation gains compared to the trips I usually plan to the Northeastern mountains.

Things were uneventful the first half of our non-stop drive, but excitement levels increased as we knocked off the Eastern states one by one. Virginia went fast and West Virginia only took a couple more hours. Then we slowly passed through Kentucky, Indiana, and Illinois before reaching the psychological point of crossing the Mississippi and Missouri Rivers at the so-called "Gateway To The West" of St. Louis, Missouri and its iconic arch around the not too bad hour of 10 p.m. Beyond here it was all new ground to Steph, and we rolled into Kansas about four hours later.

As it turned out, our timing didn't allow Steph to really witness the gradual progression from the forested East to the treeless Great Plains. Excepting the always present small islands of them, we had already left the trees behind us when dawn began to break. Now we were but small specks in the oceanic vastness of the open prairie, mostly about as flat as you can imagine, but still with occasional rolling terrain in the form of low and very broad "hills" if you want to call them that. It is actually a pretty neat experience, especially the first time. If you have lived your whole life in the forested East and the Appalachians, it is hard to imagine just how flat, open, and expansive the Plains can be until you experience it in person. And though it mostly lacks the rugged landscapes we were heading for, the farther one moves into this region the more they begin to feel like they are in "The West". We had dropped down to an elevation over 14,000 feet lower than the hoped for high point of our trip on Mount Elbert when we crossed the mighty Mississippi and Missouri Rivers, but through the night we had imperceptibly climbed back up to 3,000' when we stopped for breakfast in Oakley, Kansas.

Conquering mighty Mount Sunflower (or getting conquered by it?). Video by Dave Socky 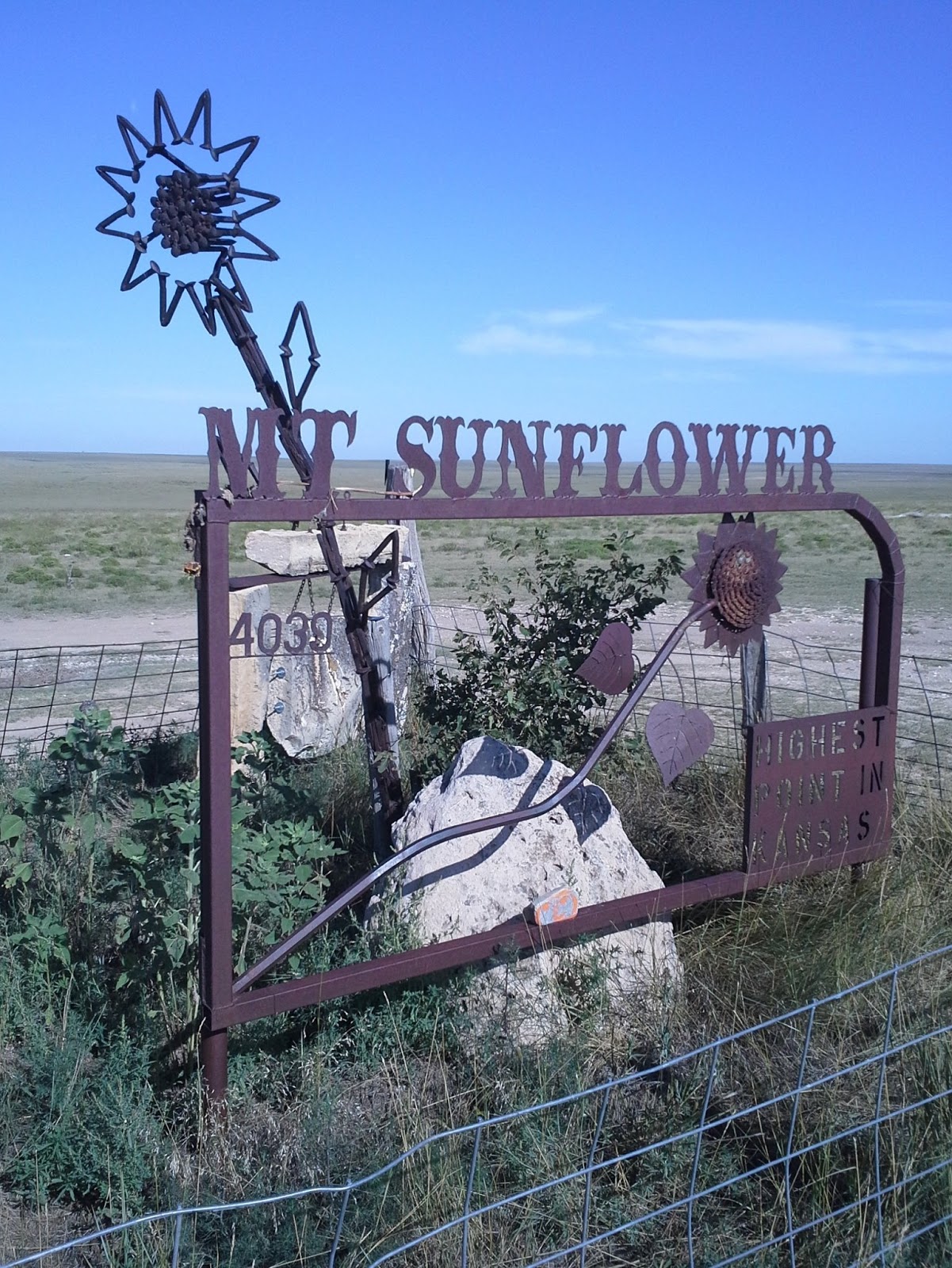 We were now only a couple hours away from the first objective of the trip, the Kansas state highpoint of Mount Sunflower. The drive there gained us yet another thousand feet of elevation - and put us within a couple thousand feet of horizontal distance from the Colorado state line, where the landscape continues on just as flat as Kansas. Dave had been here once before, only a year ago, but it was a new state for the completion list for Steph and myself, and my first new one in several years which just bumped me past the halfway point with 26. While indeed very flat, this 4,039 foot high "summit" is indeed the top of a hill, complete with two closed 20' contour lines surrounding it on the topo map. There is a neat summit marker and, despite our joking around, I actually found it to be a surprisingly pleasant spot with views for miles around and a feeling of being somewhat remote thanks to its distance from the interstate and the relative scarcity of people and houses anywhere nearby. Happy with our prize, we headed into Colorado.


It took a couple more hours, but finally, near the town of Limon, the snow-patched heights of the Rocky Mountains began to show on the horizon, almost like apparitions at first, then slowly becoming more real. This is always an exciting moment after a cross-country drive through the plains, but was especially so for Steph since it was her first visit. I remember well how emotional I felt the first time I saw 14,110' Pikes Peak looming up some 80 miles away with snow still on its upper reaches in late August of 1994, and it seemed equally so for her. In fact, she was almost giddy with an excitement that only continued to build as we gradually drew closer to the landscape of enchantment. It was really fun to witness this, and I knew she was going to have a great time. I knew I was too, and I was fully expecting this to be my best trip ever to Colorado.

Later this night, after making a run into the Denver REI, gawking at Longs Peak towering above all else 45 miles away, and having some dinner, we picked up Bill (and Steve M F Wolf) at the airport then turned in for a few hours before our true adventures began...