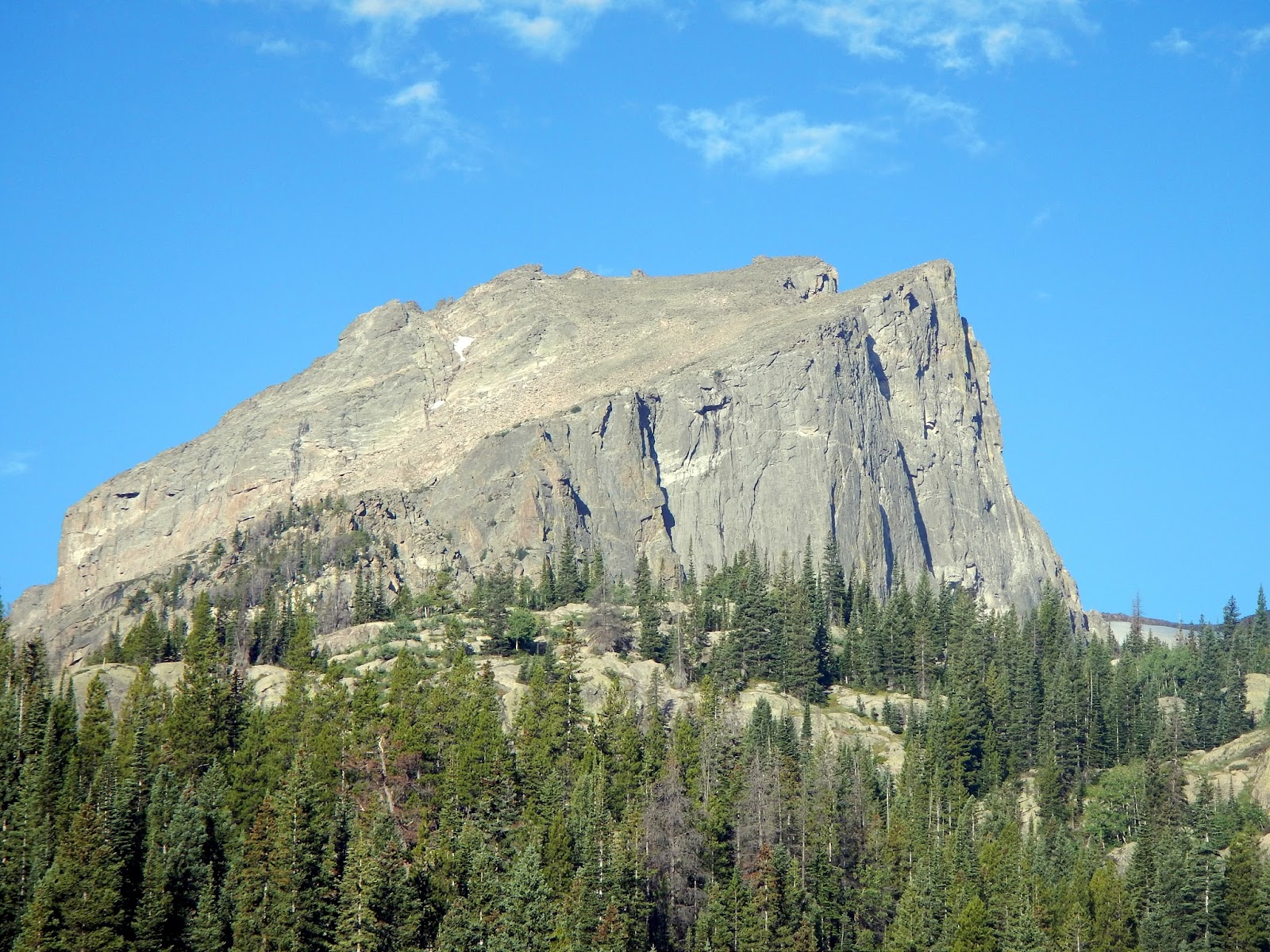 Time for the fun to really begin! We hit the road from Denver at 5 a.m. and made it to Estes Park shortly before 7 a.m. with some awesome views of Longs Peak enroute. We grabbed a quick bite to eat and then drove up to the Bear Lake trailhead for a hike in one of Rocky Mountain National Park's iconic areas. Our goal was to climb Hallet Peak by way of Flattop Mountain.


This was a trail hike all the way up to the top of the broad, aptly named summit of 12,324' Flattop, reaching treeline after only a couple miles and giving us nonstop great views in every direction except west. Hallett loomed impressively above us, as did the awesome massif of 14,259' Longs Peak, while the depths of Tyndall Gorge was below us. Actually, it was a shoulder of Hallet that loomed above us. The well known scene of the blocky cliffbound peak above Bear Lake is not the summit, nor is the summit visible from there. One must get a good way up the trail to Flattop to see the true apex.  Needless to say, Stephanie and Bill were impressed (this was also Bill's first time out West). I was feeling strong after having ran stadium stairs all Summer in anticipation of this trip, but stuck with the group until we were a good ways above the treeline. At some point though, I started pulling ahead and just kept going to the summit of Flattop, a rather nondescript point on a broad summit excepting the fact it was on the edge of Tyndall Gorge, above treeline, and surrounded by magnificence.


After a short break on Flattop, we continued the remaining 500' up the much more impressive looking Hallett to its 12,713 summit. It didn't take me long to decide this is probably the most impressive thing I have ever done in Colorado. And the feeling of finally being back in the awesomeness of the Western landscape was almost overwhelming. Hallet may not be exceptional by Western standards, but even in the Northeast that I so dearly love, it would likely claim the status of "most spectacular", beating even Katahdin. That kind of makes me sad, but it's the truth. The summit is not a spire by any means, but it is small and distinctive enough - and steep and cliffy enough - to be inspiring. And it is surrounded by a mixture of deep, cliff-bound cirques and small glaciers, and other dramatic peaks to the east, north, and south as well as large expanses of rolling alpine tundra on the western side of the Continental Divide. Farther east, beyond the foothills of the Front Range are the Great Plains stretching to the horizon and far beyond. Farther west and south are more rugged ranges of the Rockies, including the dramatic Never Summer Range and the Gore Range. Then, lording above all else in the area, is the dramatic truncated cone of 14,259 foot Longs Peak.

We were in no big hurry to leave this wonderful eyrie, and probably spent at least an hour on top eating, gawking, and talking excitedly about our surroundings and the coming days. This had been an excellent goal for our first day in the mountains, but eventually there was nothing left to do but descend back to the lowlands and prepare for the next adventure.

Dave's video of our day on Hallett Peak.


Created with Chrome OS and various webapps
Posted by crshortt at 1:30 PM