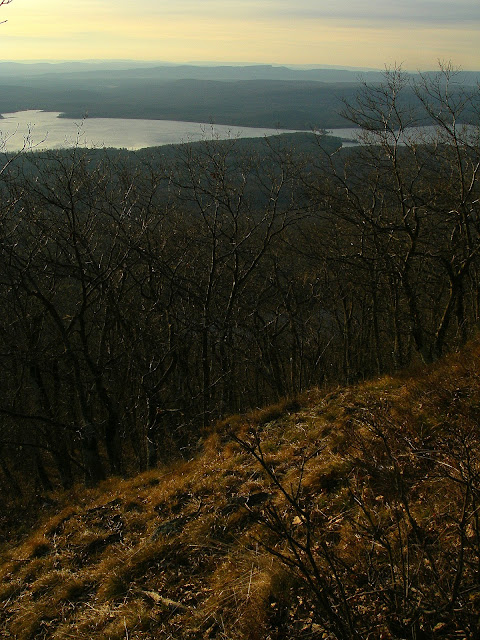 Whenever I’m lucky enough to be in the great state of New York, I feel like I have to get out and explore the mountains every chance I possibly can, both because they are so awesome and because I have so few opportunities. That’s not too hard, since the only times I’m likely to be there are on a hiking vacation or at Christmas. During Christmas visits, excepting for really bad weather, there are usually only one or two days I can’t get out for at least a short hike, if not all day. No matter where Leanne needs to go on a certain day to visit family, I’m likely going to be close to the Catskills, the Gunks, the South Taconics, the Hudson Highlands, or even the Helderbergs or the southernmost Adirondacks. This year on Christmas Eve, I was free until mid-afternoon, more than enough time to go bag a peak or two from Kingston.

One peak that caught my eye a few years ago was Ticetonyk Mountain, as seen from the causeway across Ashokan Reservoir, a rather remarkable spot for mountain views. The shape of the peak was pleasing and the curious name had a certain appeal as well. I assumed it was a Native American name at the time, but had no idea what it meant or how to pronounce it. At an elevation of only 2,510’, it’s no high peak, even in the Catskills. But it has 1,640’ of prominence, which is more than all but six of the Catskill 3500 peaks. That means it towers above its immediate surroundings quite a bit and is a very significant peak in its own right. In fact, it is the eighth most prominent peak in the whole range. A nice complimentary list to the Catskill 3500 is known as the Catskill 35 Finest, with “Finest” being an accepted moniker among peakbaggers for “most prominent”. On that list of 35 Catskill peaks, only 19 are P1Ks, having at least 1,000’ of prominence. Ticetonyk seemed like a good way to make progress on that list with my limited time, and there was another nearby peak that would allow for even more if all went well. 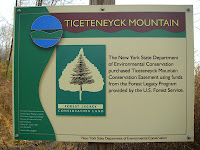 I had been unable to find much information about this peak before the trip, but I knew from the Trails Illustrated map of the Catskills that the summit area was on state lands and there appeared to be a narrow, convoluted corridor or right-of-way for access. A bit of time beforehand on the Ulster County GIS site and Google Earth let me work out an accurate route to keep my access legal. I also made note of a potential viewpoint from the aerial imagery. Having done a quick drive-by of the access point a year earlier, and talking to a couple of the locals, I felt confident that I wouldn’t have any trouble with access, despite the very abundant “No Trespassing” signs along Peck Road. Sure enough, there was even a sign that I hadn’t noticed last year at the small parking area., It proclaimed that these were state lands for “Ticeteneyck Mountain”. I was pleased to see that there were frequent markers for the corridor, as well as a faint path. The route came quite close to a couple of houses or other structures a short distance in but there were no vicious dogs or other warnings against wandering out of the corridor, which I in fact did at the point where I needed to start going up, mainly to simply avoid getting any closer to one of the houses. Nevertheless, the corridor would seem to be open to public access.

After gaining a couple hundred feet of elevation, I hit an old woods road going uphill in an acceptable direction toward the crest of the South Ridge. I followed it, wandering a very short distance outside the boundary line, then back to it right on the ridgeline. At this point the road seemed like it was going to continue sidehilling to the northwest, so I left it and began heading straight up the ridge in open woods. It was somewhat steep at first but eased up until around 2,250’, at which point it climbed steeply once again. Like before, this was short lived and I hit a terrace at 2,400’. I had a suspicion about the steep contours at this elevation on the Southeast Ridge, and so I wandered the short distance there to find a wonderful reward. There is a small, open ledge here with grassy slopes around it and it allows a beautiful view over nearby Tonshi Mountain and Ashokan Reservoir to the wide Hudson Valley and the Shawangunk Mountains. Skytop is very obvious, like from countless other places in this part of Southern New York. In the far distance the South Taconics and Hudson Highlands were also visible. Through the trees I could also see Overlook Mountain and Ashokan High Point. 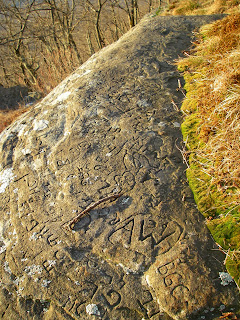 Curiously, despite the lack of info I had found about this mountain, its unclear access, and being trail-less and unmentioned in practically all the trail guides I own, the ledge had literally dozens of initials carved into it. Apparently, this is a well known and well visited spot, at least among some group of people - or it was at some time in the past.

It was only a short, easy stroll to the summit from here and I had no trouble finding the benchmark on one of the two large rocks there. It was plainly stamped “Ticetonyk”, just like the USGS topo says. Perhaps this is a corruption of the name “Ticeteneyck”, which itself may be a simplification.

Getting a bit ahead of myself here, but after getting back to Virginia at trip’s end, I spent some time online and made a couple of phone calls back to New York as well. As best I can determine, Ten Eyck is a local family name, Dutch in origin, and pronounced Ten●Ike (10●Ike). Tice (or Tys) was a member of that family. So I believe that Ticeteneyck is more likely correct and therefore pronounced Tice●Ten●Ike. Apparently the DEC agrees, based on the sign at the trailhead. Perhaps Ticetonyk is a variation on that and might be pronounced Tice●Tun●Ike? 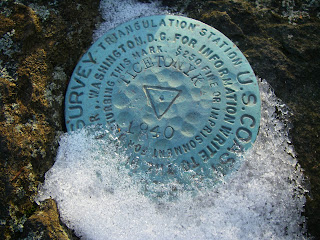 Leaving the summit, I then headed a short distance west to investigate the potential viewpoint I had noticed on Google Earth. Sure enough, there was a rather large ledge here, perhaps 30’ high. It was partially screened by trees, but by moving around a little it was possible to get some great views of all the peaks from Panther Mountain to Peekamoose, including Giant Ledge, Wittenberg, Cornell, Slide, Friday, Balsam Cap, and the tiptop of Table Mountain. I don’t think Lone or Rocky were visible however. 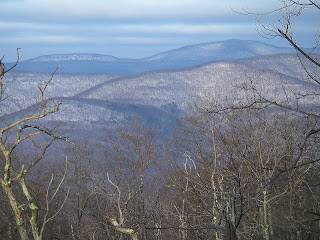 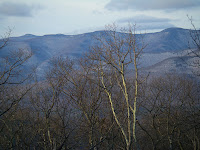 After a few minutes of enjoying this second great spot and taking a few pictures, I backtracked down the mountain and decided I had just enough time for one more peak. It was only a few more miles to Carl Mountain, which is just north of Tremper Mountain. Since most of the hike would be on the 1.6 mile long Willow Trail, I figured I could blaze up that and then only have a modest bushwhack to the summit to slow me down. Carl is yet another P1K, the 19th most prominent peak in the Catskills and the least of the P1Ks with 1,020’ of rise above the ridgeline saddle that connects it to Plateau Mountain, which is its line parent.

I encountered a sign near, but before, the trailhead warning that it was a private road, so I was unsure where to park. Thinking I might have missed it, and that a roadwalk was required to reach the actual beginning, I drove back to the previous intersection where there was a DEC sign showing the distance and direction to the trailhead. Sure enough, I had been in the right place but couldn’t go far enough without driving past the warning sign. A woman who lived beyond the sign happened to be coming down the road, and after I talked to her, she told me that she regularly sees strange cars parked along the shoulder of the road before the sign and assumed they were hikers. She then, nevertheless, gave me permission to park near her house just beyond the sign. I misunderstood where she told me to park and ended up at the trail’s beginning, so I simply pulled up into a small meadow there beside the trail and just off the road.

The trail was a little icy, but it was indeed a fast walk to the Long Path at the gap between Peak 2,830 and Carl Mountain. I left the trail and headed northeast directly for the summit. The woods were a little brushy, but not enough so to cause any real trouble. There was also some crusty snow that I kept breaking through, but it wasn’t bad enough to make me regret not carrying snowshoes. Actually, I didn’t think it would be an issue because there was only a inch or so of snow on top of Ticeteneyck, and even that was spotty. A little perseverance and the 500’ climb from the saddle put me on top. I didn’t linger, but I was curious about the steep terrain on the Southeast Ridge, so I made my way there hoping to find some open ledges. Not finding much at the likely spot, I then sidehilled back to the west at around 2,700’. There was one small opening atop a cliff that had a screened view of Peak 2,830 but not much else. Not having time to do a more thorough exploration that would have combed the eastern face of the peak, I called it a day happy to now have 13 of the 19 Catskill P1Ks checked off (though only 37 of 123 in New York as a whole). But there was yet one more minor peak to the northeast that definitely caught my eye...

The route of the Ticeteneyck Mountain hike. To see a larger map click here.
For even more viewing options, including aerial with contours, click here.

The route of the Carl Mountain hike. To see a larger map click here.

More pictures from these hikes

Ticeteneyck Mountain: 41.99062,-74.21409
Google Map for Trailhead
Scan QR code to navigate to trailheads with Google Maps on your smartphone: 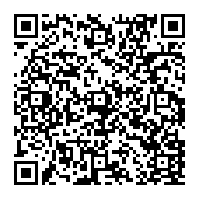 Carl Mountain: 42.07797,-74.24318
Google Map for Trailhead
Scan QR code to navigate to trailheads with Google Maps on your smartphone: 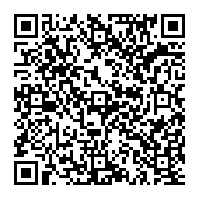